An Interview With Victoria

Deadheads star, Natalie Victoria, sits down with Victoria Hanlin to talk about all things ‘dialect’. Auditioning is part of an actor’s daily life and Natalie, like many actors, often finds herself with a dialect dilema when an audition comes in and a certain accent or dialect is required. “Where do I start?” “Do I have enough time?” “Will I be able to convince them that it sounds authentic?”

So, in a small place on Melrose on the cusp of happy hour, the conversation begins.

Natalie: Victoria, was dialect coaching something that you always knew you wanted to do? How did you become a coach? 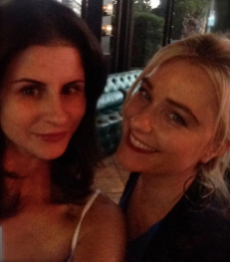 Victoria: When I was about seven years old, I would always talk in different voices, voices I had heard on TV, voices of friends or relatives from different regions. I would try to speak like them. I became quite good at mimicking. I could figure out innately, how they made their sounds and replicate them. I had always wanted to be an actor. It was acting that ultimately led me to become a dialect coach. I trained at drama school (LAMDA.) Being an actor allowed me to make wonderful professional and personal relationships with many actors. When I made the move to Los Angeles, many British actors were also heading to LA for pilot season. They needed to be able to speak in an authentic  American accent for their auditions. Because of my ability, many would ask me to coach them. This led to the actors booking roles and recommending me to others. My dialect coaching  grew organically. I absolutely loved coaching dialects so much that I no longer wanted to act. I decided to re-learn everything and learn more.  I will never stop learning and discovering new ways of coaching. That’s so important to me. I can get slightly obsessed with learning a new dialect. For me it’s like solving a puzzle. I don’t sleep until I’ve cracked it. Coaching an actor and seeing them crack the dialect  is my greatest reward.

NV: How much time does it take an actor to learn a dialect?

VH: Prepping for an audition has its challenges. These include where the actor is with the dialect or accent, how many lines they have and how much time they have before the audition. I will work with the actor for at least two to five hours, provide recordings and require them to do further practice on their own.

To learn a dialect, to the point where you can be conversational and consistently authentic takes an average of about eight to twelve weeks. Coaching the actor usually includes a minimum of three, one hour sessions a week and daily practice on their own for at least an hour.

The amount of time will vary depending on budget, how much time before shooting or before the opening night, the actors schedule, the size of the role, etc. Ideally, I like to work with them daily from two to four hours, three to six weeks before they need to be ready- the more time the better. With all that said, some people learn quicker than others.

“Coaching an actor and seeing them crack the dialect, is my greatest reward.”

NV: What accents and dialects do you coach?

VH: Any. I coach any dialect and accent. If I don’t know it or haven’t yet coached it I will research, dissect the sounds, rythm, oral posture, etc. I make sure I know it inside out and then coach the actor. I love opportunities to learn new dialects. I go exploring and become an utter geek. I enjoy finding the specificity within the dialect, finding all its colors (not a stereo-typical voice). In Britain, we have a large amount of regional dialects. I am extremely honed in on many of these and coach them often. The general American accent is another for which there is high demand.

NV: Where do you coach?

VH: If I am not with the actor on-set or in the rehearsal room, I work with them via Skype. It really is a wonderful thing. I used to have actors come to my home office but realized that so much time can be saved for the actor with a Skype call. Not only that, but actors travel a lot! The work remains consistant with Skype, an actor can be anywhere in the world and in any time-zone and still work with me on that dialect or accent.

NV: Which actors do you find to be the most impressive when it comes to using their voice?

VH: Ahhh, I just discovered Rob Brydon’s Small Man Trapped in a Box. It actually sounds like he has a small man trapped inside his body. Impressive! Both Steve Coogan and Rob Brydon are spectacular at transforming their voices. If you haven’t seen the movie, The Trip, it’s worth watching. Seeing them banter about each other’s impressions made me laugh. Cate Blanchett always seems to nail any accent she takes on. Her level of discipline, training and talent is at a high caliber. The same applies to the likes of Christian Bale, Meryl Streep, Daniel Day Lewis and Toni Collette. There are so many actors that are vocally impressive. It takes hard work, finding the right dialect coach and commitment.